Henry VIII is buried where?!

He’s the king who had six wives and tired of them like a child tires of toys, who rid himself (and the world) of anyone who disagreed with him, didn’t like the pope and was fat…. Well, not quite. The truth and the facts are somewhat simplified for the wider audience; as one American tourist said to me on thinking she had found the tomb of Henry VIII in Westminster Abbey: “Henry VIII? He’s the one who killed all his wives, right?” She can be forgiven for both thinking of him as the ‘wife-killing king’ and for assuming he would be buried within the splendour of Westminster Abbey. She was wrong on both counts.

The iconic image of Henry VIII, created by talented court painter Hans Holbein, is known worldwide. Poised in confrontational stance, he stares out of the painting, challenging us to find fault and leaving us in no doubt that he is in charge. This was a carefully crafted image as was typical of Henry. As his father before him, he consciously, purposely and effectively used ceremony, art and symbolism to send the self-asserting message to his contemporaries: “I am the rightful king of England, appointed and supported by God.” We can only imagine the consternation and anger he would feel to know that the shrine-like tomb he designed for himself was never completed.

Indeed, despite his keen control of self-image in life and instructions for his tomb and image in death, he remains in a ‘temporary’ vault under the Quire in St George’s Chapel at Windsor Castle in the company of his third queen, Jane Seymour, and also the body of Charles I and one of Queen Anne’s tragically short-lived children. The chamber is marked simply by a black marble slab placed there almost 300 years later on the orders of William IV, its functional description the only thing alerting us to his presence beneath:

BENEATH THIS MARBLE SLAB

ARE DEPOSITED THE REMAINS

AN INFANT CHILD OF QUEEN ANNE. THIS MEMORIAL WAS PLACED HERE 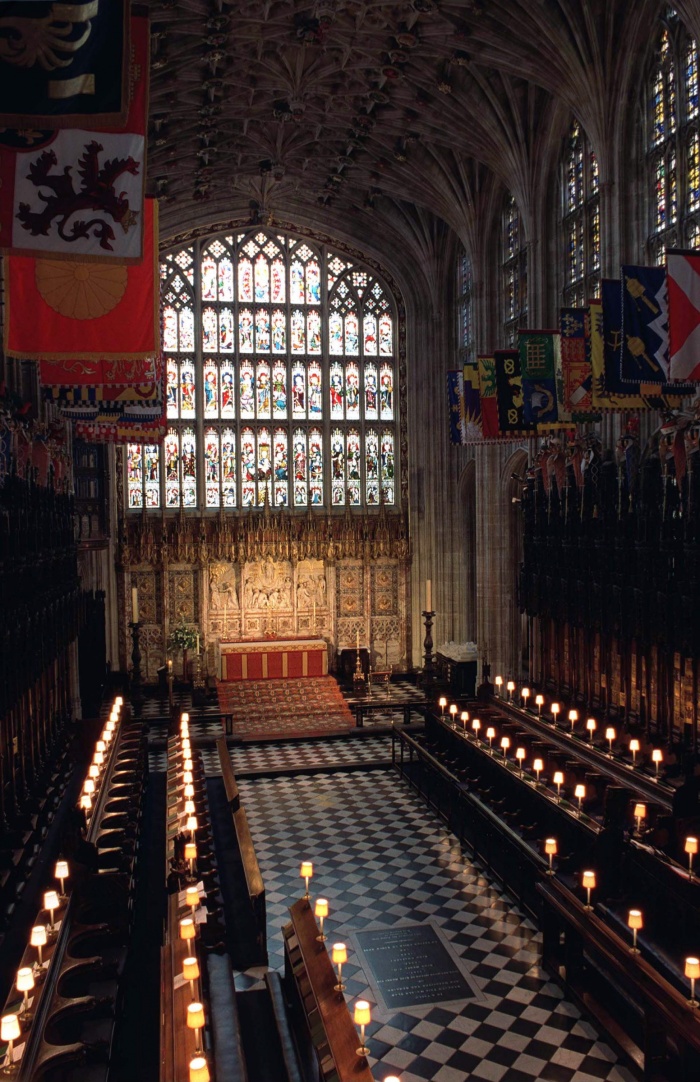 So how, when it came to what should have been Henry’s most important and enduring symbol, do we find him in a crowded vault marked only by a simple black marble tomb stone? It is a far cry from the ostentatious tomb of his father and mother in Westminster Abbey and far from what Henry imagined, indeed instructed, should be created for himself.

Henry VIII died in the early hours of 28 January 1547 at Whitehall Palace aged 55. For a couple of days his death was kept secret from everyone except those closest to the king, to allow for a smooth transition to the council rule which was to follow under his son, Edward VI. Court ritual continued so as not to alert anyone to the king’s death before everything was ready. Meals even continued to be brought to his chambers – announced, as always, by the sound of trumpets.

Edward VI was nine years old at his accession and would be only the third monarch of the Tudor dynasty. He was male and legitimate, but for the fledgling dynasty a child king was almost as dangerous a prospect as a woman on the throne. Everything had to be managed in minute detail, all of which had been planned by Henry himself. Of course this included Henry’s funeral which would, through impressive pageantry and ceremony, assert once again that the Tudors were rightful kings of England under God with the strong implication that Edward should be unchallenged. Always one for self-appreciation, Henry also wanted to show that he had been a true Renaissance king on the European stage.

The funeral procession that escorted Henry’s body to Windsor left London on 14 February with an overnight stop at Syon House. It was four miles long, included more than a thousand men on horseback and hundreds more on foot. The coffin, draped in cloth of gold with an effigy of the king on top, was pulled on a carriage by eight horses. It impressed all who lined the processional route. So far so good! Henry would have approved.

The ceremony, too, was as Henry wanted. Following a sermon by Stephen Gardiner, bishop of Winchester, Henry’s coffin was lowered into its temporary place next to his third wife and Edward VI’s mother, Jane Seymour. The white wands of office, which each office holder broke over his head, followed into the grave in customary fashion.

For his tomb, Henry requested “… a convenient altar honourably prepared and apparelled with all manner of things requisite and necessary for daily masses there to be said perpetually while the world shall endure”. Neither the tomb, nor the masses, were completed as Henry had stipulated.

A black marble sarcophagus, confiscated from Cardinal Wolsey by Henry, was already at Windsor. Thanks to John Speed, the 17th-century mapmaker and antiquarian, and his 1627 book The History of Great Britaine, we are able to understand how Henry planned to use it for himself. Fortuitously, for Henry’s original manuscript has since gone missing, Speed transcribes the instructions Henry left for a double tomb, magnificent in size, decoration and iconography.

Described in around 1,400 words, the plans included effigies of the king and queen as if sleeping; numerous angels; prophets aloft columns; scriptures and children with baskets of red and white roses scattering them down over the tomb and the pavement beyond. It would have been fabulous, very ‘Henry-esque’ – if it had been built! However, the sarcophagus remained at Windsor for more than 250 years until the Georgians found a use for it and transported it to the crypt of St Paul’s Cathedral, London, where it now holds the coffin of Admiral Horatio Nelson.

So why did Henry not ensure his legacy by having his tomb built in his own time? Lack of money perhaps, although that had never deterred Henry from large expensive projects before. More likely, then, that despite Henry’s concern (you could say preoccupation) with the Tudor succession, he simply did not want to face up to his own mortality. Talk of the death of the king was a treasonable offence. Indeed, it had been a brave Sir Anthony Denny who had finally told Henry on the evening of 27 January 1547 that he was dying and thus allowing him (just) enough time to take the last rites – essential for one of the Catholic faith, as Henry was right to the end of his life.

Henry may not have liked to think about his own death, but three of his children followed him to the throne. Did none of them wish to honour their father with a fitting monument? The short answer is ‘no’. At any rate, none of them did. But why was this the case?

Edward VI may have been a child of only nine years old when he followed his father to the throne, but he had determination beyond his years and had one clear agenda – to make England Protestant. Edward was ruthless in his reforms, going far beyond anything his father had done. He died only six years later and had dedicated the majority of his reign to religious reform. We can surmise that building his father’s tomb as designed, with all its trappings of the Catholic faith, was neither a priority nor a concern to the boy king. It was far easier to display his father’s memory for his own use in his own image. A portrait of Edward in the National Portrait Gallery, believed to have been painted following his accession, mimics the strong pose of his father in the Whitehall Mural.

Edward was succeeded in turn by his two older half-sisters. First Mary, daughter of Henry’s first wife, Catherine of Aragon, and then by Elizabeth, daughter of his second wife, Anne Boleyn. Unlike Edward, both sisters had been subjected to emotional damage at the hands of their father and both had suffered the devastation of being declared illegitimate, coupled with separation from their mothers.

Of the two, Mary suffered the most. Elizabeth, two years old when her mother was executed, may have been confused to be addressed one day as ‘Princess Elizabeth’ and the following day ‘the lady Elizabeth’, but the toddler probably had no lasting memories of such events. On the other hand, Mary could remember all too vividly the cruel treatment herself and her mother endured at the hands of her father when he failed in his efforts to secure a divorce from Mary’s mother, Catherine of Aragon, in order to marry Anne Boleyn. Mary had been forbidden to see her mother, forced to agree that her parents’ marriage was illegal and that her mother had never been queen, and to reject the pope and recognise her father as supreme head of the Church in England. It would be difficult to overestimate the impact all these things had on her. Tragically, mother and daughter were kept apart and Mary never saw her mother again.

It would therefore have been surprising for Mary to expend much energy on the glorification of her father’s memory. Besides, she was far too busy trying to undo his and Edward’s religious reforms by re-establishing the Catholic church in England under the pope in Rome.

After Mary came Elizabeth, who is known to have enjoyed reminding people that she was her father’s daughter. Elizabeth often referred to Henry when speaking to her council and made reference to him in a speech to parliament quite late into her reign, in 1593, when she talked of the debt she was in to her father “whom in the duty of a child I must regard, and to whom I must acknowledge myself far shallow”.

Many historians and writers have asserted that Elizabeth’s references come from a deep affection for her late father, which had developed toward the end of his life when she spent a great deal of time at court. Perhaps this is true. However, it is difficult to deny that her references served a purpose. Invoking her father’s memory, aided no doubt by her inheritance of his auburn hair, reminded those around her of her descent and provided Henry’s support for her legitimacy from beyond the grave. Ironically this was something he had failed to do in life when he restored her to the succession but left her illegitimate.

Elizabeth I is not known to have spoken of her mother in public, however a ring she wore, now known as the Chequers Ring, contained a miniature portrait of her mother and one of herself. Although she had only been a little girl of two years old when her mother was beheaded at the Tower of London, Elizabeth felt a connection to her and, privately at least, kept her memory alive. Would she have been willing to create a tomb to her father when she could not have done the same for her mother?

We could surmise from all of this that once Henry’s mortal presence was gone his children were not going to be his biggest supporters. It was easier to invoke his name at points where it was advantageous to them than to muster the effort and money required to erect his permanent shrine. Nowadays, then, thousands of visitors walk over his remains every year without realising they are so close to the infamous Henry VIII.

Philippa Brewell is a historical trip writer and blogs at britishhistorytours.com